Article from the Sydney Morning Herald, 27-April-2012. Photos by yours truly from the Australia Zoo this month.

MBW and MBD actually held one at the zoo. Your intrepid photographer was content to snap pics from a distance! 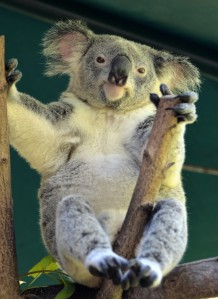 KOALAS are expected to be listed as a threatened species across parts of Australia from Monday, and some environment groups claim the government has excluded the marsupial from protection in certain areas due to mining interests.

Research conducted near Gunnedah, which is promoted as the ”koala capital of the world”, show numbers for the animal there have declined by 75 per cent since 1993, yet koalas in the area are not expected to be granted extra protection. The Environment Minister, Tony Burke, said his decisions about the animal’s status were based on advice from the national Threatened Species Scientific Committee. A decision originally slated for mid-February was deferred until April 30.

The new ruling will be published next week but, based on current data, is likely to list koalas in south-east Queensland as ”endangered”, and animals east of the Great Dividing Range in NSW as ”vulnerable”. In practical terms, the listings would mean the federal government could potentially impose conditions on plans for new mines, housing developments and logging operations to stop them from interfering with koalas and their habitat.

The national icon is dwindling because of the combined pressures of development in its habitat, drought, climate change and from the disease chlamydia.

Its numbers in Victoria and South Australia are relatively healthy and so the animals are unlikely to attract the protective classifications in those states.